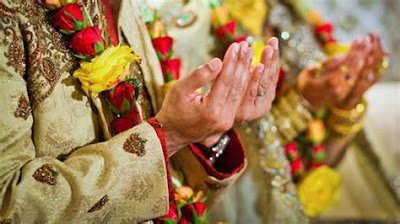 
A Muslim marriage is treated as a mere civil contract and not a sacrament (a religious ceremony or ritual regarded as imparting divine grace). Marriages of Muslims are as similar to a contract, have the same characteristics. For instance:

1.     Marriage requires proposal (ijab) from one party and acceptance (qubul) from other so is the contract. Moreover, there can be no marriage without free consent and such consent should not be obtained by means of coercion, fraud or undue influence.

2.     Just as in case of a contract, entered into by a guardian, on attaining majority, so can a marriage contract in Muslim law, be set aside by means on attaining the age of puberty.

3.     The parties to a Muslim marriage may enter into any antenuptial (existing or occurring before marriage) or post-nuptial agreement which is enforceable by law provided it is reasonable and not opposed to the policy of Islam. The same is the case with the contract.

4.     The terms of a marriage contract may also be altered within legal limits to suit individual cases.

5.     Although discouraged both by the holy quran and Hadith, yet like any other contract, there is also provision for the breach of marriage contract.

‘Dower, under the Mohammedan law, is a sum of money or other property promised by the husband to be paid or delivered to the wife in consideration of the marriage’.

In Hedaya, it is laid down, ‘The payment of dower is enjoyed by the law merely as a token of respect for its object (the woman), Therefore the mention of it is not absolutely essential to the validity of marriage, and, for the same reason, a marriage is also valid, although the man was to engage in the contract  on the special condition that there should be no dower’.

Another view is that marriage is not purely a civil contract but a religious sacrament too. Though the sacramental nature of marriage is considered as an orthodox view it is also supported by the judiciary.

After observing minutely it will be found that besides some similarities there are so many basic differences between the two (contract and Muslim marriage). For instance.

Muslim marriage is not merely a civil contract, because:

I.           Unlike a civil contract, it cannot be made contingent on future event, and

II.           Unlike civil contracts, it cannot be for a limited time (muta marriage is an exception).

Obligations of the husband

o   The husband undertakes not to abuse his wife/child(ren) verbally, emotionally, physically, or sexually, he should respect her.

o   Not to withhold economic contribution towards his wife/family

o   Not to sexually transmitted disease or other transmissible diseases.

o   Not to misuse /interfere with the wife's property.

He is obliged to fulfill all his marital duties including maintaining his wife through his lifetime or until divorce and if he has more than 1 wife so maintaining all wife’s equally according to his capacity, otherwise having more than one wife shall be considered as not legal in the eyes of court and also according to Mohammedan law. Justice between multiple wives

The rights of Muslim men are :

o   Men can demand verbally, emotionally, physically, or sexually respect from women, she should not abuse him in that way.

o   Women are obliged not to misuse/interfere with the husband's property.

Some rights which the wife owes to her husband are:

·       To be obeyed in all that is not disobedience to Allah

·       That she not leave the house without his permission

·       That she can only undertake a voluntary fast with his permission.

·       Not to desert/be absent from the marital home for more than 60 days unless by mutual agreement.

This is suggested to you that please consult a lawyer.