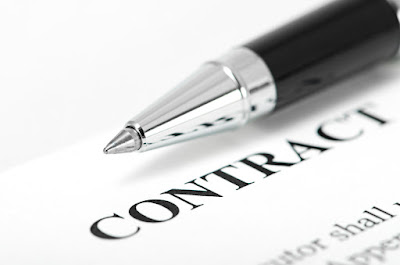 Contract is a legally binding agreement between two or more parties. Contracts are made so as to promote a harmony with both the parties through its provisions. Contract serves as a legal protection for both the parties involved in a potential business deal and where both the parties should agree to the terms and conditions mentioned in the contract. The consent shouldn’t be taken by fraud or misrepresentation, so that the consent so achieved can be called as free consent.
There is a difference between contract and agreement, the general difference is that a contract is legally enforceable and an agreement is not. This simply means that the agreement which is lawfully valid becomes a contract, and a contract is legally enforceable because it meets the requirements and approval of the law.
Therefore, the agreement is the first step of entering into a contract. Agreement can then be called the process of agreeing upon doing some work/transaction mutually discussed between parties and the contract is suggestive as the descriptive written information which provides the basis of conditions, clauses and sub-clauses prerequisite for being agreed by the parties to fulfill the sale purchase transaction service etc.
Before, two honest parties agreed upon some verbal mutual consent to undergo transfer sale purchase, monetary or non-monetary transaction. Though now-a-days every legal agreement is a written contract, to safeguard the vested interest of both the parties when if the dispute arises hence a legal written contract gains more relevance today. A contemporary example of the same is the rent agreement etc.
For contracts, legal enforceability is required to be looked at. Legally enforceable refers, to compelling somebody to do a certain thing/task which he/she is obliged to do, as the binding party itself gave the consensus to it (subject matter of agreement) in order to complete that task, for example the sale deed of a propertyis a loan agreement between buyers and sellers of a car.
A contract is not something only carried out in big business deals but also takes place while having small transactions like, when you put a coin in the slot of a weighing machine, even taking a seat in a bus, metro or autorickshaw amounts to a contract. In many cases we do not even realize that we are entering into a contract.

The law relating to contracts is contained in theIndian Contract Act, 1872. Some important sections of the act are discussed below:
·        Section 2(h) of the Indian Contract Act, 1872 defines a contract as an agreement enforceable by law.
·        Section 2(e) defines agreement as “every promise and every set of promises forming consideration for each other.”
·        Section 2(b) defines promise in these words: “When the person to whom the proposal is made signifies his assent thereto, the proposal is said to be accepted. A proposal when accepted, becomes a promise.”
From the above definition of promise, it is obvious that an agreement is an accepted proposal. We can derive two elements to an agreement from the definitions mentioned in the sections, which are:
(i)               offer or a proposal; and
(ii)             an acceptance of that offer or proposal

Essential elements of a valid contract
We have seen above that the two elements of a contract are: (1) an agreement; (2) legal obligation. Section 10 of the Act provides for some more elements which are essential in order to constitute a valid contract. It reads as follows: “All agreements are contracts if they are made by free consent of parties, competent to contract, for a lawful consideration and with a lawful object and are not hereby expressly declared to be void.” Thus, the essential elements of a valid contract can be summed up as follows:
1. Agreement.
2. Intention to create legal relationship.
3. Free and genuine consent.
4. Parties competent to contract.
5. Lawful consideration.
6. Lawful object.
7. Agreements not explicitly declared as void or illegal.
8. Certainty of meaning.
9. Possibility of performance.
10. Necessary Legal Formalities.
Offer + acceptance = Promise + consideration = Agreement + enforceability by Law = Contract.
Payment of money, or consideration is a vital element in the law of contracts. Consideration is a benefit which must be negotiated for between the parties, and is the essential reason for a party entering into a contract.

Disclaimer:
The topic discussed here is a brief of the subject matter and should not be substituted as proper legal advice. If a matter comes up under this topic then it is strictly advisable to consult a professional for advice and for the procedure and practice to be followed.